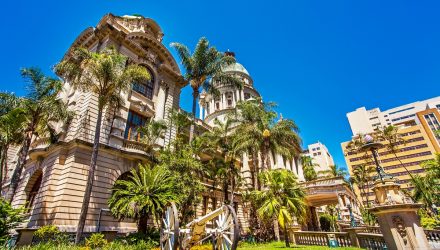 The South Africa country-specific ETF rallied Wednesday as the South African rand currency firmed below the 14.00 level for the first time in six weeks while the weaker U.S. dollar fueled investor demand for developing markets.

Meanwhile, the South African rand appreciated 1.3% to ZAR13.91 against the U.S. dollar.

The U.S. dollar has been depreciating on weak economic data, another round of global trade tensions between the U.S. and Europe, and the International Monetary Fund’s lowered global growth outlook.

The U.S. dollar Index, which tracks USD moves against a basket of developed market currencies, was hovering around 96.94 after hitting a high of 97.67 in early March.

“The carry trade for the month has been very active. There’s a lot of foreigners buying bonds in South Africa and that’s helping the rand outperform other currencies for the day,” said Treasury One chief currency dealer Wichard Cilliers.

Have you signed up for the ETF Trends Virtual Summit on Wednesday, April 17? It’s complimentary for financial advisors (earn up to 5 CE Credits)! Register now to learn about fixed income strategies for a changing debt world.

Nevertheless, Cilliers warned that the rand’s strength may be short lived since the current rise may be attributed to external factors.

“A stronger rand means lower inflation, which means more money for South Africans as the interest rates are not going to be high, which is positive for the retailers and the financial sector,” Lentsoane told Reuters.