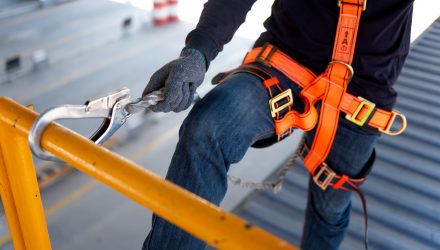 Industrial sector ETFs lagged the broader market after 3M (NYSE: MMM) cut its outlook and announced it will restructure its businesses after weak sales across key markets around the world.

Meanwhile, industrial stalwart 3M plunged 13.0%, marking one of its worst days since Black Monday on October 19, 1987. MMM makes up 5.5% of DIA’s underlying portfolio and 5.4% of XLI’s holdings.

3M revealed lower-than-expected quarterly profits, cut its 2019 earnings outlook for the year and said it will lay off 2,000 workers as part of a restructuring process in its overall business, CNBC reports.

The first quarter results were largely dragged down by litigation-related pretax charges of $548 million or 72 cents per share.

Meanwhile, sales in Asia-Pacific, its biggest market outside the U.S., declined 7.4%, while sales in Europe, the Middle east and Africa decreased 9.4%.

Scott Davis, chairman and CEO of Melius Research, pointed out that 3M’s performance has fallen far behind other industrials in the first quarter but contended that the company’s results aren’t a reflection of a larger problem within the economy.

“We have other companies that have shorter cycle businesses, too, and they have not seen this type of decline. I don’t think its broader than what we’re seeing, I think it’s fairly 3M specific,” Davis told CNBC. “The long-term reputation of this company is they’re slow to restructure, and when they do, it’s not enough.”

“The first quarter was a disappointing start to the year for 3M,” CEO Mike Roman said in a statement. “We continued to face slowing conditions in key end markets which impacted both organic growth and margins, and our operational execution also fell short of the expectations we have for ourselves.”

“As a result, we have stepped up additional actions – including restructuring – to drive productivity, reduce costs, and increase cash flow as we manage through challenges in some of our end markets.”