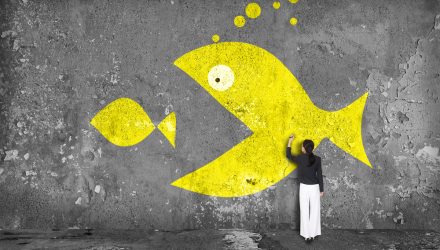 Small-Cap ETFs Could Benefit from Greater M&A Activity Ahead

Corporate America has hoarded the largest cash pile ever, potentially opening up the opportunity for greater mergers and acquisitions down the line and bolstering the case for small-cap companies and exchange traded funds.

According to Moody’s Investors Service, cash holdings at non-financial companies expanded to a record $2.1 trillion at the end of June, or up 30% from the same time last year and higher than the previous peak of nearly $2 trillion in 2017, the Wall Street Journal reports.

According to data compiled by S&P Dow Jones Indices, the total amount held by S&P 500 companies excluding those in the financial, transportation, or utility sectors is expected to be around $1.9 trillion as of the end of the third quarter.

Among investment-grade borrowers tracked by BNP Paribas, the ratio of current assets against current liabilities, which is used to estimate liquidity, increased to 86% in Europe and 97% in the U.S. The last time the ratio was at those levels was back in 2000 during late 2009-early 2010 in the U.S. and mid-2004 in Europe.

U.S. companies raised cash this year after issuing record-breaking amounts of debt to strengthen their balance sheets in response to the Covid-19 pandemic disruptions on their normal operations. As of Nov. 30, U.S. companies issued over $2 trillion of investment-grade and high-yield bonds, the most on record in data going back to 2006. Meanwhile, many cut back on repurchases, dividends or capital expenditures given the uncertain market environment.

Furthermore, many anticipate companies to take advantage of this lower-for-longer interest rate environment to maintain high leverage to support growth ahead.

“It doesn’t make sense for cash-laden companies to pay down debt in this interest-rate climate,” David Kotok, chief investment officer at Cumberland Advisors, told the WSJ. “That cash is going to be put to more shareholder-friendly uses.”

“The unintended consequence of this situation is all of a sudden companies have a lot of cash,” Thomas Majewski, managing partner at Eagle Point Credit Management, told the WSJ. “That money burns a hole in companies’ pockets quickly, so they will be looking to be acquisitive next year.”