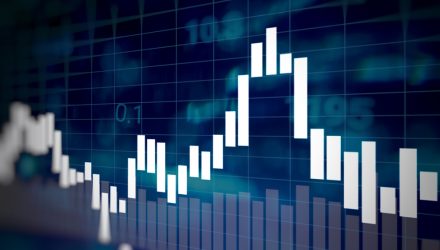 As the rout in small-capitalization stocks continues, an exchange traded fund that tracks the benchmark Russell 2000 Index has broken below its key technical level.

The iShares Russell 2000 ETF (IWM) has declined 1.4% and broke below its long-term support at the 200-day simple moving average, the first time it has been trading below the technical level in 11 months.

The iShares Russell 2000 ETF has declined 4.1% over the past week, but it is still up 9.8% year-to-date and is now lower than the benchmark Nasdaq-100 Index for the year.

While the small cap segment has been retreating, ETF investors have been trying to catch the falling knife. Over the past week, IWM has attracted around $300 million in net inflows, according to ETFdb data. However, the small cap ETF has bled $325 million in assets so far in August.

U.S. markets have been under pressure over the past week amid rising concerns around rising infection rates given the Covid-19 delta variant. The Russell 2000 is down for the sixth consecutive session on Thursday and is headed toward its longest losing streak since February 2020, Bloomberg reports.

Small-capitalization stocks have been outperforming for most of 2021, until last month when smaller companies began to lag behind their larger peers in response to the shift to large growth stocks and other assets seen as a safer play in times of growing economic uncertainty.

“People are looking for a little bit more safety right now and obviously smaller caps tend to be a little bit more volatile,” David Wagner, a portfolio manager at Aptus Capital Advisors, told Bloomberg. “They’re more dependent on GDP, dependent on growth, dependent on an accelerating economy, and given the emergence of the delta variant, you’ve somewhat capped some of those from a sentiment standpoint.”