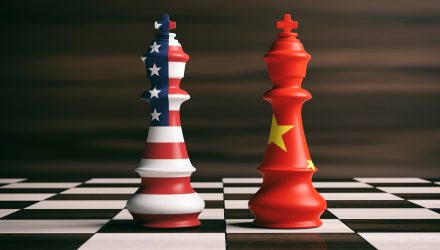 Rising Tensions Between the U.S. and China Weigh on Stock ETFs

U.S. markets and stock ETFs stumbled along on Tuesday as the trade deal between the United States and China comes into question.

“There is beginning to be more and more tension between the two biggest economies in the world,” John Cunnison, Chief Investment Officer of Baker Boyer, told Reuters.

The rebuke erased earlier positive sentiment, following talks among senior U.S. and Chinese officials after weeks of escalating tensions between the world’s two largest economies. The two sides said they were committed to the phase-one trade deal.

Trade tensions between the U.S. and China triggered widespread market turmoil last year before the world’s two countries agreed on a phase-one deal in January. However, as relations fractured over Covid-19, technology, and the new national-security law imposed by China on Hong Kong, more investors are worried that the heightened tensions could cause a negative impact on trade and would further weigh on a beleaguered global economy.

The added uncertainty weighed on a market that has been breaking into new records, with the S&P 500 and Nasdaq both trading around all-time highs.

“It’s tough to really push through all-time highs,” Matt Hanna, portfolio manager at Summit Global Investments, told the Wall Street Journal. “We have some resistance there.”

Looking ahead, the markets will be watching out for the annual Jackson Hole conference of U.S. central bankers a where Federal Reserve Chairman Jerome Powell is expected to speak.