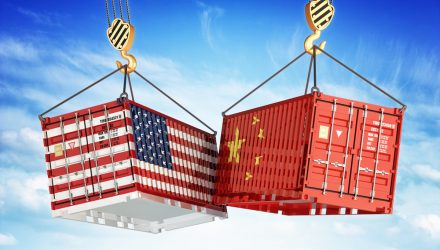 U.S. markets and stock ETFs plunged Thursday after the latest rhetoric from Chinese officials added to fears that Beijing and Washington are moving farther apart on any potential resolution to the prolonged trade conflict.

Ministry of Commerce spokesperson Gao Fengtold CNBC that the U.S. should “adjust its wrong actions” if it wants to continue negotiations after Washington blacklisted Huwai Technology last week, sending markets into a nosedive on fears of further retaliatory responses and higher trade barriers ahead, the Wall Street Journal reports.

“Everything is in the red today,” Larry Peruzzi, managing director of international equity trading at Mischler Financial, told the WSJ. “China is digging in and it seems like things are getting worse. It’s just putting together a very negative sentiment for the market.”

The technology sector was among the hardest hit after several more companies put distance between Huawei Technologies, following the U.S. trade restrictions against the Chinese telecommunications giant.

“Investors realize that coming to a deal is going to be more challenging and that is really harmful to the economic environment,” Luke Tilley, chief economist at Wilmington Trust, told Reuters. “It’s a classic risk-off movement where you’ve got the higher-bated sectors such as financials, industrials and technology selling off the most.”

The prolonged trade war is starting to impact growth. IHS Markit data revealed manufacturing growth exhibited its weakest pace of activity in almost a decade while new orders dipped for the first time since August 2009.

Investment confidence has also dissipated in the wake of the growing uncertainty. According to the American Association of Individual Investors’ latest survey, around 24% of investors were bullish at the start of March, the lowest reading since late December and down from the 40% earlier this month.