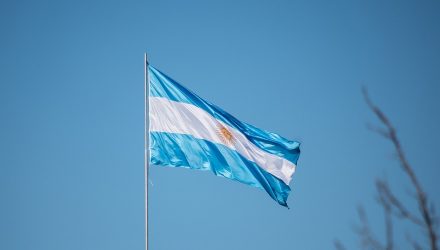 After experiencing a steep plunge, Argentina country-specific exchange traded funds could warrant another look, especially with Buenos Aires and the International Monetary Fund taking steps to stabilize the economy.

The Global X MSCI Argentina ETF (NYSEArca: ARGT) and iShares MSCI Argentina and Global Exposure ETF (AGT) have plunged over 30% from their July highs to multi-year lows, and bargain hunters may be stepping back into this beleaguered market.

Bankers and brokers, though, now see some more optimistic investors looking into the market on hopes that environment would improve and valuations recover.

“We’re gradually starting to see more inquiries from foreign investors,” Christian Reos, research manager at brokerage Allaria, told Reuters. “The valuations of companies don’t reflect their reality right now. Today they are at high risk because Argentine assets are very volatile, but looking at things in the medium term it’s an opportunity to buy.”

Luiz Ribeiro, head of Latin American operations at asset manager DWS, believed that moderate, left-leaning Peronist Alberto Fernandez, whom beat out Macri in the primaries by a landslide, could take a more pragmatic approach to stabilizing the economy.

“We see markets pricing in the worst case scenario, which we do not see as the most likely,” Ribeiro told Reuters, referring to the likelihood a Fernández government would be more moderate than expected. “At the current prices we are not going to sell. We just need more signals from Alberto (Fernández) that he is really going in that direction and how he is going to get there, so that we can actually buy.”

Argentina may also find a helping hand from the IMF as the institution continues talks with Argentinian authorities to try and support the economic conditions, Reuters reported. Fernandez has pledged, if elected, to rework a $57 billion credit line with the IMF to avoid defaults on foreign debt.

“Our engagement remains strong with Argentina,” IMF spokesman Gerry Rice told reporters. “The IMF’s objective has been to try and help the authorities stabilize the challenging situation and allow for a return of confidence that would pave the way for growth.”