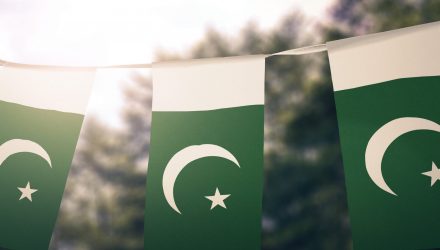 A Pakistan-specific ETF led the charge on Monday after a positive outcome from the International Monetary Fund’s quarterly review of the economy and the MSCI’s decision to keep the country classified as an emerging market.

The Global X MSCI Pakistan ETF (NYSEArca: PAK) advanced 2.8% on Monday and was testing its long-term resistance at the 200-day simple moving average.

The IMF said Pakistan’s fiscal deficits were narrowing and also announced it would release the first batch of its $6 billion in financial assistance for the country, Reuters reported.

The Fund previously agreed to a three-year rescue package for Pakistan in April after the economic outlook deteriorated.

“Completion of the review will enable disbursement of SDR 328 million (or around $450 million) and will help unlock significant funding from bilateral and multilateral partners,” Ramirez Rigo, head of an IMF mission to Islamabad, said in a statement.

“The government policies have started to bear fruit, helping to reserve the buildup of vulnerabilities and restore economic stability. The external and fiscal deficits are narrowing, inflation is expected to decline and growth although slow, remains positive,” the IMF statement added.

Ahead Of The IMF

Looking ahead, the IMF expected that the economy will gradually strengthen and average inflation was expected to weaken in the 2020 fiscal year. However, risks both domestically and internationally remain, along with structural economic challenges.

“Positive for Pakistan! IMF Mission concludes successfully. IMF confirms that Pakistan met all First Quarter Performance Criteria by good margins and the economy continues to get better. Thank you, PM and the entire team!,” Dr. Abdul Hafeez Shaikh, a financial advisor to the prime minister said in a tweet.

The index provider’s review is highly influential in the way foreign investors would gain exposure to various emerging markets, including Pakistan. Foreign investors hold an estimated $1.5 to $2 trillion in investments that track the benchmark MSCI Emerging Market Index.