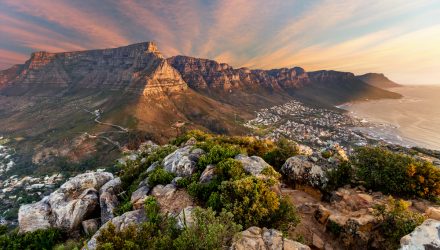 A South Africa country-specific ETF retreated Monday, with the South African rand currency suffering its worst drop in more than two months after President Cyril Ramaphosa had to defend himself in a leadership challenge from party rivals opposed to his plans to tackle corruption and economic reforms.

The iShares MSCI South Africa ETF (NYSEArca: EZA) was among the worst-performing non-leveraged ETFs of Friday, plummeting 4.3% and breaking below both its short- and long-term support at the 50- and 200-day simple moving averages, respectively.

South Africa’s anti-corruption watchdog stated that Ramaphosa “deliberately misled” parliament over a 500,000 rand, or $35,955, donation he received. Ramaphosa has stated that it was a donation toward his campaign for the ANC leadership.

The sudden accusation delivered a blow to Ramaphosa’s character after he staked his reputation on cleaning up South African politics since replacing former president Jacob Zuma two-and-a-half years ago. However, he has faced factional struggles in the ANC where a section of the party remains loyal to Zuma.

The rand plunged as much as 2.1% after the sudden political uncertainty, leading emerging-market currency declines against the U.S. dollar. Furthermore, implied volatility spiked, reflecting options traders’ fears of wider swings in the coming weeks, Bloomberg reports.

South Africa’s government has been struggling to revive an economy that was stuck in a recession even before the coronavirus outbreak. The Treasury projects the economy to contract more than 7% this year.