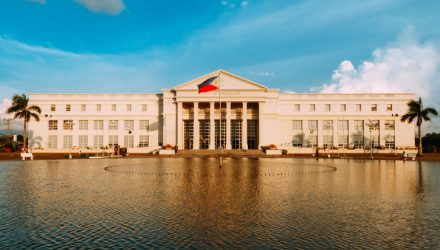 A Philippines country-specific ETF stood out on Monday, with the Philippine stock market surging to a 16-month high, on expectations the central bank could enact further interest rate cuts while the government looked into relaxing laws and taxes to bolster investments.

The iShares MSCI Philippines ETF (NYSEArca: EPHE) was up 2.2% on Monday.

The Philippine Stock Exchange officially broke into a bull market on Monday, rising 22% since its November-low, after the central bank committed to resume its policy easing in the second half of the year, Bloomberg reports.

Inflationary pressures slowed to its weakest in almost two years last month and moved in a downward trend that economists argued would allow for more cuts to the central bank’s key rate. So far this year, the benign local inflation is back and helped lift the prospects for a double-digit growth in corporate earnings alongside a stronger domestic economy.

Philippines central bank Governor Benjamin Diokno said they were committed to resuming its policy easing this second half, adding that the the Federal Reserve’s impending rate cut is an “additional input to our decision.”

Foreign investors are also moving back into the Southeast Asian market. After pulling out more than a $1 billion in 2018, overseas funds have stepped back into Philippine equities, transferring over $430 million in net inflows so far this year. Foreign investors also added $20.4 million into the market Monday, the biggest amount in five weeks.

“Investors may gain confidence as Q2 (second quarter) earnings start to come in (this) week which are expected to come in better than what we have seen in the last few quarters due to lower costs and higher spending,” Research Head Christopher John Mangun said in a weekly market report, according to BusinessWorld.