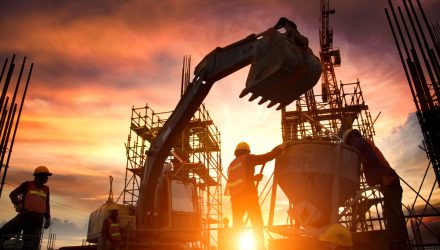 Look to a Targeted Infrastructure ETF as America Builds Back Better

With the passage of a $1 trillion infrastructure package, investors can turn to an infrastructure sector-specific exchange traded fund to capture the ambitious build-out from the country’s biggest investment of roads, bridges, airports, and waterways in decades.

Jeff Spiegel, Director, Megatrends, iShares, in a research note argued that IFRA could enjoy three tailwinds for infrastructure stocks, including a tailwind for cyclicals, a tailwind for non-cyclicals, and the Build Back Better opportunity.

Spiegel explained that as the Build Back Better plan kicks off and new infrastructure projects begin, cyclical companies like materials producers and construction companies will benefit from the spending plans. Specifically, the projects include plans to modernize 20,000 miles of highways, roads, and main streets, as well as repairing 10,000 bridges, which will also have spill-over effects from critical inputs like cement and steel.

The Build Back Better plan is also designed to expand the nation’s physical infrastructure. With a strong backbone, the long-term benefits directly support infrastructure providers, such as utilities and railroad operators, who deliver critical infrastructure services across the U.S. Furthermore, Spiegel argued that these companies can expand their service areas, improve service, quality and benefit from operational improvements because of increased investment.

Lastly, the infrastructure plan will be the largest federal investment into the public works system in over a decade, and investors may even look out for more funding on the way through the 2022 federal budget and other spending. President Joe Biden initially proposed over $3 trillion in overall infrastructure spending, but the plans have been broken up into smaller pieces, with the initial $1 trillion passing through Congress.

“This demonstrates the range of attractive returns across the entirety of the infrastructure value chain – from steel companies providing inputs to maintain and rebuild critical infrastructure, to the owners of the physical assets themselves,” Spiegel said.