You are at:Home»Equity ETF Channel»Johnson & Johnson, UnitedHealth Give Healthcare ETFs a Much Needed Bolster Shot 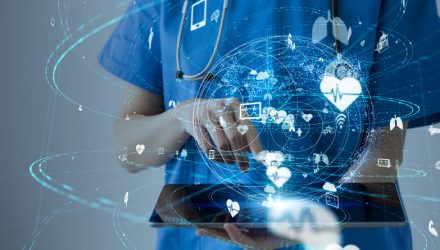 Healthcare stocks have been among the worst performing areas in the S&P 500 this year, gaining just 5.4% compared to the 19% rise for the benchmark index. The sector has been vulnerable to political risks as politicians have called for controlling the expensive drug prices and Democratic presidential candidate Bernie Sanders pushing for a Medicare for All plan.

Daniel Clifton and Courtney Rosenberger at Strategas Securities argued that the underperformance of health-insurance stocks reflects the probability of a Democratic nomination that would push through negative policy changes for the healthcare industry. Even former Vice President Joe Biden, a moderate, has shown support for expanding on the Affordable Care Act with a public health-insurance option, such as Medicare, which would compete with private insurers.

“The equity market does not see Biden as a real threat to private insurance, the way you would Bernie Sanders or Elizabeth Warren,” Clifton told the WSJ.

“Statements that health care will be socialized, Medicare for All, combined with pressure from the Republicans on pharmaceutical cost controls and so forth” are adding pressure, Sam Stovall, CFRA’s chief investment strategist, told the WSJ.