You are at:Home»Equity ETF Channel»Jobs Data Will Weigh Heavily on Fed’s Next Rate Move 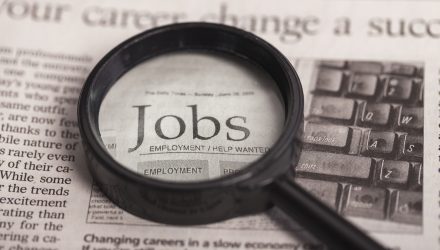 Jobs Data Will Weigh Heavily on Fed’s Next Rate Move

Last week, the Labor Department revealed that only 75,000 jobs were created in May, which fell below expectations and could be a sign that the U.S. economy could be on the verge of a slowdown. Nonetheless, the unemployment rate remained at a generational low of 3.6 percent.

Additionally, there are some other interesting tidbits when breaking down the Labor Department’s data even further.

“In the face of major uncertainty and trade headwinds, wage growth and aggregate hours worked continue to rise at a moderate pace, with average hourly earnings rising 0.22% month-over-month and 3.1% year-over-year,” cited Rick Rieder, BlackRock’s Chief Investment Officer of Global Fixed Income. “In fact, more impressive is the consistency of the other data on jobs and hiring that have been released over the past few weeks (except for the ADP report).”

“The markets have priced in more than four policy rate cuts by the Federal Reserve over the next year and a half, as they clearly are anticipating the Fed’s disposition toward perpetuating further economic growth,” Rieder added. “Yet, it is worth recalling that the Fed’s mandate is actually today targeted at full employment and price stability.”

When it comes to the U.S. economy, if you bring up the thought of a recession to Treasury Secretary Steven Mnuchin, he might give you a look of bewilderment. That’s because compared to the rest of the world, Mnuchin views the U.S. as the only shining star.

“As it relates to the employment numbers, I wouldn’t focus on any one number: There’s plenty of volatility in these numbers,” he added. “We still see the growth in the U.S. as really quite strong.”

Mnuchin’s comments come as the Labor Department recently revealed that only 75,000 jobs were created in May, which could be a sign that the U.S. economy could be on the verge of a slowdown. Nonetheless, the unemployment rate remained at a generational low of 3.6 percent.