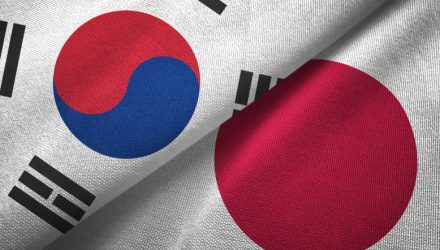 Japan ETFs May Be an Overlooked Area of Global Market

Japanese companies are turning a profit and the economy is strengthening, but Japan’s markets and country-specific ETF remain undervalued and largely overlooked.

James Mackintosh for the Wall Street Journal argued that global investors have passed over Japan’s markets largely because of perceived risks associated with a global slowdown.

Japanese equities are populated by economically and currency-sensitive cyclical companies whose profits have surged but could swiftly pullback in face of a global downturn. Moreover, cyclical stocks are already out of favor, so investors won’t be putting any value on Japan’s cyclical profits anyways.

Nevertheless, monetary and fiscal policies have helped stimulate this Asian economy. For instance, while inflation remains below a 2% target, the country has dug itself out of two decades of deflation. The overall government budget is on pace for the smallest deficit next year since the post-bubble recession of 1993.

Market reforms have helped encourage better allocation of capital by companies and supported trends for more women joining the workforce.

The actions have translated to improving markets. According to MSCI data, earnings per share have increased faster than in the U.S. recently. The Ministry of Finance also showed operating profit margins for big nonfinancial companies were not far off the peak of 8.6% in the second quarter of last year, or far above the 2007 high of 5.7%.

Nevertheless, global trade remains a real overhang for the Japanese economy. Japan’s huge manufacturers are heavily exposed to global winds and to the foreign exchange market, and profit margins have declined as both weighed on exporters.

The country’s markets reveals it is home to the cheapest financials, the cheapest industrials, and the cheapest consumer discretionary companies, which combined account for half the market, or more than the U.S., U.K., Eurozone or emerging markets.

So, if you believe the world economy could turn around, Japan should do well as we return to normal.