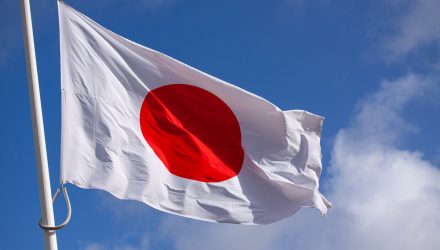 Japanese markets and country-specific exchange traded funds have been outperforming and among the standouts in the global markets this year.

The Japanese Topix index closed above the 2,000 point level for the first time since May 1991 after automakers and lenders bolstered the gauge’s gains this month, Bloomberg reports. To put the gains in perspective, the Topix has more than doubled the returns of the broader MSCI Asia Pacific Index so far in 2021.

“The bad news is slipping away one by one, and what’s left is earnings,” Hiroshi Matsumoto, head of Japan investment at Pictet Asset Management, told Bloomberg, pointing to the ‘unexpectedly dovish’ signals from the Federal Reserve, Japan’s decision to lift the coronavirus state of emergency, and progress being made on vaccinations, along with the recovery in corporate earnings.

As coronavirus cases abate, Japan will end a state of emergency for the Tokyo region on Sunday. With infections under control, the island nation will not have to impose the type of economically damaging restrictions experienced in other countries. The recent shutdowns also came with less economic damage than the first state of emergency, now declared almost a year ago.

Looking ahead, investors are waiting on the Bank of Japan’s announcement on Friday where the central bank policymakers are expected to end months of speculation over the results of a policy review to adjust its asset purchases program.

“Market sentiment feels like it is to the upside for now, but I think we remain hostage to the treasury yields,” Takeo Kamai, head of execution services at CLSA Securities Japan Co, told Bloomberg. The yen’s “trajectory toward 110 is also a tailwind for the exporters.”