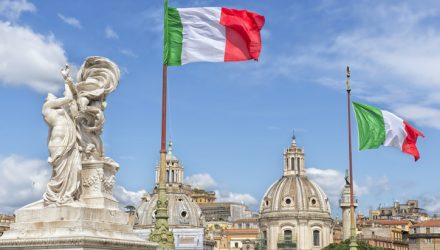 Italy country-specific exchange traded funds stood out among the top performers on Wednesday on rising bets the European Central Bank would implement stimulus ahead and as the European Commission decided to withhold disciplinary action against Italy over its debt.

“Crucially, Lagarde has always been supportive of the ECB’s unconventional policies, including QE (quantitative easing), which is essential for the credibility of future decisions,” Pictet Wealth Management strategist Frederik Ducrozet told Reuters. “She could very well be the one implementing a QE2 programme in her first year as president.”

Euro zone money markets expect a 10 basis point cut in the ECB’s deposit rate in September and anticipate another round of asset purchases.

Italy was viewed as a key beneficiary of any new ECB quantitative easing.

Further strengthening Italy’s outlook, the European Commission dropped its threat of disciplinary action against the country after Rome took action to bring its growing debt into line with the European bloc’s fiscal rules, Bloomberg reports.

“The commission has concluded that a debt-based Excessive Deficit Procedure for Italy is no longer warranted at this stage,” Economic Affairs Commissioner Pierre Moscovici told reporters in Brussels on Wednesday after a meeting of the European Union’s executive arm. “We will need to continue to monitor Italy’s budgetary execution very closely in the second half of this year.”

The two sides have been butting heads over fiscal policy ever since the Italian populist government gained power last year. Brussels wanted Italy to quickly reduce its debt load, which was the second-biggest in the euro area.