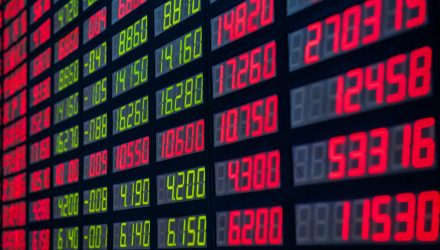 U.S. markets and stock exchange traded funds were mixed Wednesday with the technology-heavy Nasdaq falling behind on concerns over an overheating economy and potential policy changes that could rein in growth.

The latest minutes out of the Federal Reserve revealed that regulators are supporting a lower-for-longer interest rate environment with accommodative monetary policy, Reuters reports. The Fed has pledged to keep interest rates near zero until inflation exceeds their 2% goal.

Loose monetary policy coupled with President Joe Biden’s proposed $1.9 trillion package for pandemic relief have caused some to warn of a coming surge in inflation. Data on Wednesday already revealed a substantial jump in U.S. producer prices and a strong rebound in retail sales.

“We’re in the early stages of a business and market cycle, and so the worry is whether it’s getting too hot too quickly and whether the [Federal Reserve] will make a move,” Brian Levitt, global market strategist at Invesco, told the Wall Street Journal. “I think it’s incredibly premature.”

Some market participants are concerned that the Fed may have to change its interest rate policy sooner than expected, contributing to Wednesday’s equity pullback. Inflation fears are further reflected by a sharp rise in benchmark Treasury yields, which may be partially attributed to expectations for greater inflation.

“You maybe have to put somewhere in the foreseeable future that they have to do something,” Michael O’Rourke, chief market strategist at JonesTrading, told Reuters, referring to the Fed.

“But it’s a high threshold we have to cross in order to get them to react,” O’Rourke added. “That’s why we’re not selling off massively.”