You are at:Home»Equity ETF Channel»Industrial ETFs Are Outperforming Among U.S. Sector Picks 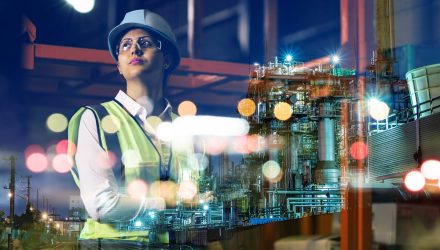 For the first time in five years, industrial stocks and sector-related ETFs are on pace to lead stock market gains on a quarterly basis.

According to Dow Jones Market Data, the industrials group has not been the best performer in any quarter since the end of 2013 and has only ever taken the lead four times, the Wall Street Journal reports.

Industrial stocks, which are currently on pace for their best quarter since the third quarter of 2009, have never led the benchmark U.S. index for a full calendar year.

Furthermore, the industrials sector is beating the next best sector, the energy group, by almost 3 percentage points – the widest gap between industrials and the second-place sector in any of the quarters industrial stocks have outperformed.

Market observers warned that the strength in the industrial segment, which is closely tied to the health of the global economy, is notable due to the lingering uncertainty over the accuracy of corporate forecasts in light of the ongoing trade negotiations between the U.S. and China. Furthermore, traders need to take into account the slowdown in global markets, notably in Europe and Asia, along with industrial production figures for January that revealed a sharp dip.