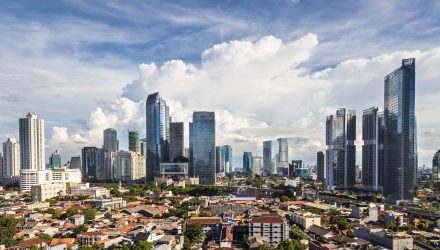 Indonesia country-specific exchange traded funds were among the worst performers Wednesday after the Southeast Asian economy recorded its biggest ever monthly trade deficit in April, revealing its ongoing struggles in a global environment gripped by trade concerns.

Weighing on Indonesia’s equity markets, Statistics Indonesia revealed the value of goods shipped from the country to the rest of the world plunged by 13.1% year-over-year in April, compared to economists’ expectations of a 7.2% fall, the Financial Times reports. Meanwhile, imports for the month slipped by just 6.6% year-over-year, compared to forecasts for a 12.1% decline.

The wide trade deficit “may exert additional pressure on the Indonesian rupiah although the central bank has pledged to support the currency,” economists at ING said prior to the data release, adding that Jakarta has been trying to hold onto a surplus with policies intended to limit imports.

Indonesia is a major exporter of commodities, including palm oil and coal. Prices on these raw materials have slipped this year on rising speculation of a global slowdown in response to increased trade barriers, notably between the U.S. and China.

Bahana Sekuritas warned that Indonesia may be caught between U.S. and China as trade talks or lack there of continues. The Southeast Asian country is a major supplier of coal, rubber and forestry products to both countries.

Further weighing on Indonesian markets, data published last week also revealed the economy grew at a slower pace than expected over the first quarter, which was partially attributed to the weakening export sector.