You are at:Home»Equity ETF Channel»India ETFs Plunge from a One-Two Blow 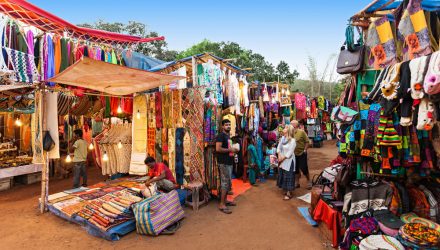 India’s gross domestic product contracted 23.9% over the three months ended June from a year earlier, marking the sharpest plunge in economic activity since the country began publishing quarterly figures in 1996, Bloomberg reports. In comparison, economists had a median estimate of an 18% pullback.​

The emerging economy is also on track for its first full-year contraction in over four decades. The country’s economy has come to a standstill as India is quickly becoming the global epicenter for coronavirus infections.

“While the start of the July-September quarter has likely benefited from a post-lockdown boost, those gains are already at risk of being lost amid the ongoing pandemic and New Delhi’s hesitance to open the fiscal taps,” Priyanka Kishore, head of India and Southeast Asia economics at Oxford Economics Ltd., told Bloomberg.

Some warn that the mix of monetary and fiscal measures so far to boost the economy won’t be enough to prevent a recession. The government provided a small fiscal support given limitations on revenue growth while the central bank has cut interest rates by 115 basis points so far this year.

Further weighing on India’s equity markets, a military clash along the India and China border added on to the negative market sentiment.

The sentiment was also impacted by the Indian market regulator’s decision to extend the September 1 deadline for implementing new rules on margin pledge.

“The market was in the overbought zone,” Rahul Sharma, head of research at Mumbai-based Equity99 Advisors, told Bloomberg. “Geopolitical tensions and the new margin rule requirements from tomorrow provided a reason to sell. Brokers were overactive today to align with the new rules.”