You are at:Home»Equity ETF Channel»India ETFs Gain Momentum on Hopes of Support Under Modi 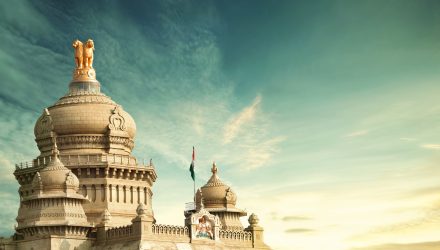 India ETFs Gain Momentum on Hopes of Support Under Modi

India country-specific ETFs are gaining momentum, with Indian markets setting a new record on Tuesday, as foreign investors jumped back into this emerging market on hopes that Prime Minister Narendra Modi’s ruling coalition will retain power in the upcoming election.

Over the past month, the iShares MSCI India ETF (CBOE: INDA) jumped 9.4% and WisdomTree India Earnings ETF (NYSE: EPI) advanced 11.1%. Meanwhile, the S&P BSE Sensex broke through its previous closing high after showing one of the region’s worst performances of 2019.

Foreigners are betting that the so-called Modinomics could further help support India’s economy after  Mod’s ruling coalition retains power in elections that start later this month. Analysts pointed to optimism over the upcoming elections, along with projections of strong earnings growth, notably in the financial sector, as major factors in contributing to market gains, the Wall Street Journal reports.

According to Goldman Sachs data, foreign institutions bought a net $4.3 billion worth of Indian stocks in March, the biggest monthly total in two years, bringing the yearly total to about $6.6 billion.

This year’s election is “more about policy continuity,” Sunil Koul, a regional strategist at Goldman Sachs, told the WSJ.

Goldman analysts project Indian corporate earnings to expand 16% in 2019, the fastest clip in the region. Nevertheless, the fast pace may be partly attributed to the poor results a year ago for banks that were burdened by nonperforming loans. Koul added that the asset quality at some banks has improved, which made them more palatable to investors.

“I think it’s more of a style shift than people jumping the gun on what the election outcome is going to be,” Hui said.