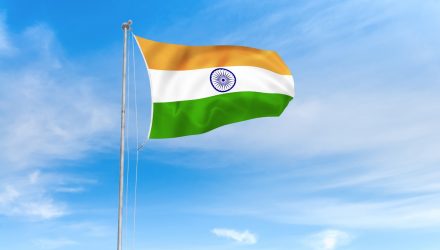 Global growth is uneven, and India’s markets and country-specific ETFs are reflecting this unequal performance to the rest of the world as the developing economy expands at its slowest pace in six years.

The iShares MSCI India ETF (CBOE: INDA), the largest India country-related ETF by assets, rose 0.9% over the past month and is up 3.8% year-to-date.

India has been plagued by a credit crisis this year as lenders outside traditional banking defaulted and retrenched under government pressure, the Wall Street Journal reports.

Economists at the Center for Global Development even underscored the growing inconsistency between several recessionary economic indicators in India, compared to the country’s official headline growth rate.

For example, non-oil imports fell 12.3% in September year-over-year, and industrial production and sales tax revenue declined 4.3% and 2.7%, respectively, over the same period. An unreleased government report indicated that the country’s per capita consumption levels decreased between the 2011-12 and 2017-18 fiscal years, the first in four decades, due to a drop in rural demand.

Former chief economic adviser to the government of India, Arvind Subramanian, even previously published analysis that argued the country’s average annual growth of about 7% between 2011-12 and 2016-17 had been overstated by 2.5 percentage points.

If we take GDP figures at face value, India’s low income level and fast population growth would still make the official growth rates relatively low at around 5%. The favorable demographics with high number of young people entering the workforce should translate to greater growth rates.

Subramanian also warned that if the government is following its current headline growth rates while the economy is actually expanding at a slower pace, there is little incentive for the country to drastically alter its policy. Without viewing the economy in an objective lens, officials may not be able to steer the economy toward the right course.