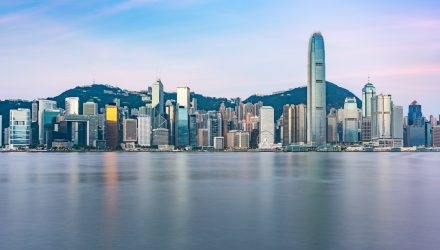 Hong Kong-related ETFs were among the leading areas in the markets Thursday on hopes that negotiations between the U.S. and China were moving to higher levels with a resolution around the corner and on China’s pledge to liberalize the banking sector.

Hong Kong markets strengthened with the financial sector leading the charge after negotiators made progress on the U.S.-China trade dispute, including access to key markets and how to roll back punitive tariffs. People familiar with the talks revealed that U.S. Trade Representative Robert Lighthizer and Treasury Secretary Steven Mnuchin and Chinese negotiators explored ways to come to terms over several longstanding issues, the Wall Street Journal reports.

Further supporting the rally, China’s government announced that the $44 trillion financial sector would be further opened to foreign banks and insurers to comply with the United States to end a year-long trade war between the countries, South China Morning Post reports.

The head of China’s banking and insurance regulator said it would go ahead with 12 changes, including allowing overseas insurers to set up in the country and removing caps on foreign and domestic single shareholders’ holdings in local commercial banks.

“The market is focusing on the benefits of the opening up, which is a better-developed market, and not worrying about the greater competition between domestic and international players,” Kenny Tang Sing-hing, chief executive of China Hong Kong Capital Asset, told South China Morning Post.

AIA Group, the largest insurers listed in Hong Kong, jumped 4.1% to a record HK$83.25, contributing 120 points to the Hang Seng Index’s advance. The AIA Group is also the largest component among the Hong Kong-related ETFs, making up 21.6% of EWH’s portfolio holding.