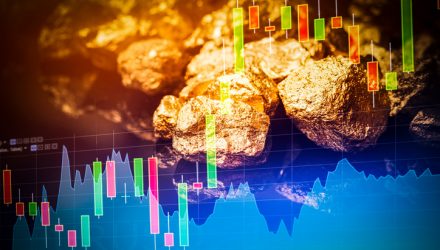 The GraniteShares Gold Trust (BAR) was also up 1.4% on Tuesday.

After his meeting with Chinese President Xi Jinping over the weekend, President Donald Trump commented that any deal with China would have to be “somewhat tilted” in favor of the U.S., adding to uncertainty over a deal any time soon.

“The trade fiasco could be a positive factor for gold as the deal is still not reached yet,” Carlo Alberto De Casa, chief analyst with ActivTrades, told CNBC. “The stock markets are in the red, which is another positive thing for gold.”

“Geopolitical tensions around Iran breaching the 2015 nuclear agreement, which is seen as a provocation by Trump administration, and with market expectation of two or more rate cuts by the U.S. Federal Reserve this year, is helping gold to retrace,” Klearman added.

Looking ahead, lingering trade tensions and the Fed’s monetary policy outlook will remain key factors in maintaining the momentum in the gold market.

“Upcoming U.S. economic numbers and Federal Reserve speakers’ comments are critical as we approach the Federal Open Market Committee meeting at the end of July,” UBS analysts said in a note. “The potential for renewed trade tensions and broader geopolitical risks, in our view, is likely to spur further inflows into gold by financial investors.”