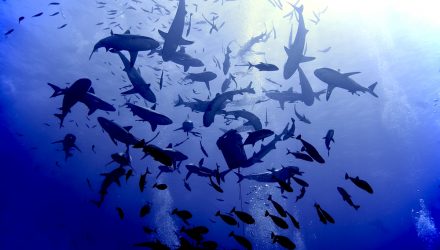 A Feeding Frenzy: GameStop Pulling These ETFs Along for the Ride

The buying frenzy in GameStop Corp. (NYSE: GME) has lifted a number of sector and thematic exchange traded funds.

Meanwhile, GameStop shares climbed 112% on Wednesday. GME makes up 13.6% of GAMR’s underlying portfolio and 9.5% of XRT. The recent gains in GameStop has caused a sizeable shift in GME’s weight among the ETFs. For instance, XRT, which follows a more equally weighted indexing methodology, shows a pronounced difference between its GME’s position and its second largest position, 1.9% in Blink Charging Co.

GameStop’s meteoric rise may be attributed to a Subgroup of the Reddit community called WallStreetBets that has effectively cornered a segment of the market in a bid to target outsized institutional-sized investors with a huge short position on the company.

If enough people pile into a single stock, the prices rises rapidly. While this is normal for any security, GameStop also has huge short interest, or people betting on the fall in the stock.

In this instance, however, as GME’s price rises too quickly, short sellers may be forced to buy back into the position to cover their losses. For instance, high-profile short sellers of GameStop, including Melvin Capital and Citron, announced that they had covered most or all of their positions after the surge in prices.

The GameStop trade also gained momentum Wednesday after Tesla CEO Elon Musk tweeted out a link to the Reddit board where discussions over the GME short squeeze was taking place.

The trade is seen as easy money among the short-term risk taking crowd, but long-term investors must be comfortable with the high risk associated with the trade.

Bank of America raised its price target on the stock to just $10 per share on Wednesday, warning clients that while the increased share price could help fund GameStop’s plans, it still presents risk, CNBC reports.

“While it is difficult to know how much very high short interest and retail ownership … could continue to put upward pressure on shares, we think fundamentals will again factor into valuation,” Bank of America said.