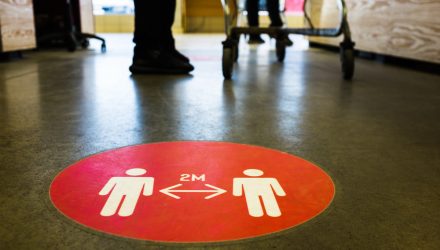 Europe-related exchange traded funds have been weakening as a resurgence in coronavirus cases triggers renewed shutdown measures to contain the new outbreaks.

Investor confidence in the euro currency has slipped as Europe braces for another economic fallout from the reinstated lockdown measures. Net speculative positions by hedge funds that the euro will rise against the dollar dipped to a two-month low, the Wall Street Journal reports.

The turn around has been a stark contrast to the summer when investors began to take bets that the euro would strengthen against the greenback after the European Union passed a robust stimulus package while new Covid-19 cases dropped. However, the resurgence in Covid-19 cases have fueled concerns that the €750 billion, or $878.81 billion, recovery fund won’t be enough if new cases weigh on the resumption of economic activity.

For instance, the U.K. introduced a three-tiered system of lockdown measures for England and London was at the second-highest alert tier on Saturday. France declared a state of emergency and set a nightly curfew in the Paris region and eight other metropolitan areas. The Czech Republic also shut schools, restaurants and bars through early November.

Florian Hense, an economist at Berenberg, has already downwardly revised fourth-quarter growth forecast to 1% from 2.5% due to the spike in Covid-19 cases and subsequent restrictions.

“We had this feeling that Europe managed the first coronavirus wave quite well and that led to a rally. To me now, it does appear the market is souring on that view,” Jane Foley, head of foreign-exchange strategy at Rabobank, told the WSJ.