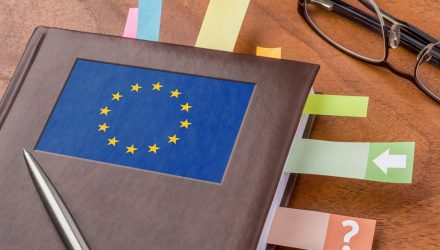 European banks and sector-related ETFs have suffered through a negative rate environment, and the European Central Bank just cut key interest rates even further into the red. However, the banking segment is finding some relief after the ECB announced a new tiered deposit rate specifically tailored to help financial companies.

The ECB cut its key deposit rates by 10 basis points to negative 0.5%, but Europe’s financial sector still strengthened on the less-than-anticipated  rate cut and the introduction of an exemption for part of deposits that have been struck with negative rates, or a so-called tiering system.

“This decision aims to support the bank-based transmission of monetary policy, while preserving the positive contribution of negative rates to the accommodative stance of monetary policy,” the ECB said. “The remuneration rate of the exempt tier and the multiplier can be changed over time.”

According to JPMorgan Chase & Co analysts led by Kian Abouhossein, Deutsche Bank AG could benefit the most from the ECB’s new tiered deposit rate as Germany’s largest lender stands to save roughly 200 million euros, or $222 million, in annual interest payments, or 10% of its 2020 pretax profits, Bloomberg reports.

The ECB lowered its deposit rate as the Eurozone economy tackles persistently low inflation rates and a weakening economy, especially with the overhanging trade war that has gripped the global economy. Banks warned that the lower deposit rates would make it even harder to boost their faltering profitability, with Deutsche Bank Chief Executive Officer Christian Sewing previously stating that negative interest rates will “ruin the financial system” in the long run.

Commerzbank AG would be the second-biggest tiering beneficiary, JPMorgan Chases analysts added. The bank could save about 100 million euros, or around 6% of its 2020 pretax profit. The total relief for the banking system could amount to about 1.7 billion euros.

“Banks would like to have positive rates, unquestionably,” ECB President Mario Draghi said at a press conference. But profitability is much more affected by costs, and adapting to new technology would be “much more compelling than being angry about negative rates.”