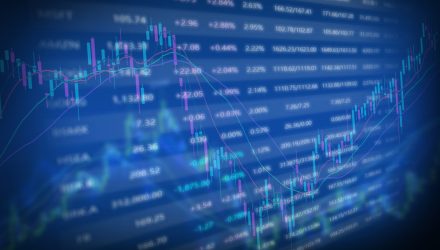 U.S. markets and stock exchange traded funds struggled to find direction Wednesday as investors waited on updates to ongoing negotiations over the next coronavirus relief package.

U.S. House of Representatives Speaker Nancy Pelosi hoped to resolve the “appropriations piece” of the aid bill later in the day, Reuters reports. Additionally, Pelosi and Treasury Secretary Steven Mnuchin are scheduled to go over the details of the stimulus package later.

While there has been a show of progress, traders are vacillating as impediments remain. For instance, Senate Majority Leader McConnell does not want a large coronavirus aid bill on the Senate floor before the election, according to a senior Republican aide.

“There is no clarity whether even if they come to an agreement, it would get through the Senate with Senate Leader McConnell,” Thomas Hayes, managing member at Great Hill Capital LLC, told Reuters.

“What we are seeing at the moment is the market trading on these headlines, but to us, a pre-election stimulus deal seems unlikely,” Seema Shah, chief strategist at Principal Global Investors, told the Wall Street Journal. “We can hear as much as we want from Pelosi and Mnuchin about progressing talks, but some senators have said simply that they won’t support any package.”

“The same companies that are doing really well right now because of the work-from-home trend, are not the same ones that will be successful in 2021,” Mies told the WSJ.

Meanwhile, political risk surrounding the presidential election continues shadow the markets. President Donald Trump and Democratic candidate Joe Biden will come together in their second and final debate on Thursday night where Trump will try to head off the lead that Biden has taken.