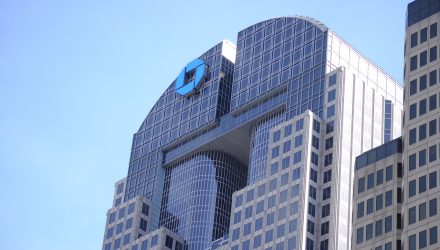 The Financial Select Sector SPDR (NYSEArca: XLF), the largest financial sector-related ETF on the market, has already attracted $815 million in net inflows so far in April, according to ETFdb data.

First-quarter earnings for the financial sector’s biggest players will start on Friday with J.P. Morgan Chase and Wells Fargo up to bat, providing a preview of how the Federal Reserve’s shifting monetary policy affected some Wall Street players at the start of the year.

Big banks, which were pommeled toward the late months of 2018 along with broader indices amidst rising recessionary fears, are viewed as an indicator for the stock market since the sector’s performance tends to reflect investor’s outlook on the economy, the Wall Street Journal reports.

The Fed’s shifting policy has fueled concerns over banks’ ability to generate a profit, especially after policy makers said they will be patient on further rate hikes this year amid a weakening economic outlook and low inflationary pressures. Meanwhile, the Treasury yield curve, which represents the spread between short- and long-term bonds, inverted last month for the first time since 2007, further adding to concerns that it could foreshadow an upcoming recession.

“We are prepared for—though we are not predicting—a recession,” JPMorgan Chief Executive James Dimon wrote in a letter to shareholders last week.

The flattening and inverted yield curve have also weighed on the banking outlook since financial services typically benefit from higher interest rates or widening interest spread on loans and savings. Bank earnings have strengthened since the Fed started hiking rates in late 2015.

“The biggest issue with the banks is that the Fed has signaled that they’re standing pat on rate policy for now,” Patrick Healey, founder and president of Caliber Financial Partners, told the WSJ. “Banks need rising interest rates to support their net interest margins, which are a big profit item and something that’s closely watched by investors in the bank sector.”