You are at:Home»Equity ETF Channel»Energy ETFs Jump on Fears of Rising Geopolitical Tensions in the Middle East 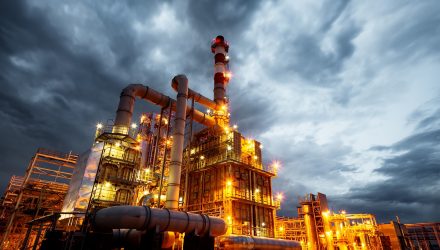 Energy-related ETFs climbed Friday on geopolitical risk and concerns over Middle East supply after  an Iranian tanker near the Saudi Arabian coast was attacked by what the ship’s owner believed was a missile strike.

The National Iranian Tanker Co., which owns the oil tanker Sabiti, claimed its vessel was 60 miles from the Saudi Arabian port of Jeddah where it was likely struck by missiles that damaged its main tanks, the Wall Street Journal reports.

“We’ve seen a bit of a knee-jerk reaction to those reports in Brent,” Edward Marshall, commodities trader at Global Risk Management, told the WSJ. “But despite an apparent attack on a vessel in an arterial global trade route, there’s some apathy and not much hedging going on.”

The incident is the latest in a string of escalating tensions in the Middle East after Washington and Riyadh accused Tehran instigating attacks on Saudi Arabia’s oil-processing facilities at Abqaiq and Khurais that dented the global crude oil supply.

“Obviously this [Friday’s] jump was far less than the one we saw after the Saudi oil installations were attacked,” Tamas Varga, analyst at PVM Oil Associates, told the WSJ. “But nevertheless, it’s still a stark reminder that the Middle East is anything but a peaceful part of the world. I think the price reaction is quite logical.”

Additionally, the broader markets also rallied on hopes of progress between U.S. and China trade talks in Washington on Friday, especially after the protracted trade war weakened global markets.