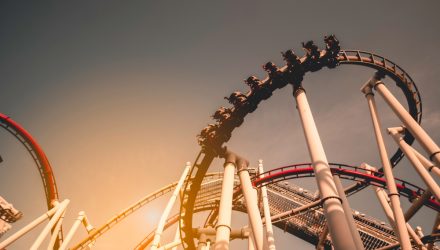 Media and entertainment sector-specific exchange traded funds stood out Tuesday as Discovery (NasdaqGS: DISCA) and ViacomCBS (NasdaqBS: VIAC) bounced following an unprecedented selloff in response to a near $30 billion fire sale from a large hedge fund due to a forced margin call.

Meanwhile, Discovery shares advanced 5.4% and ViacomCBS shares rose 3.6%. DISCA has plunged 47% while VIAC plummeted 55% from their recent highs last week. DISCA makes up 3.9% of PEJ’s underlying portfolio and 2.0% of IEME. VIAC accounts for 7.1% of PEJ and 6.6% of IEME.

Concerns over further trades and additional volatility weighed on market sentiment Monday as money managers sought to reposition portfolios ahead of the end of the first quarter.

The Wall Street Journal reported that the highly leveraged Archegos accumulated large, concentrated positions in companies and held positions through swaps. The quick liquidations appear to have left Archegos under duress following the heavy losses.

“While the speed of the fall has attracted attention for all of the wrong reasons, prompting speculation of a large margin-call liquidation, what most people appear to have missed is that both of these companies have seen their share prices almost quadruple since October last year,” Michael Hewson, chief market analyst at CMC Markets, said in a Sunday note, MarketWatch reports.

The precipitous plunge in Discovery shares was so dramatic that the company had to issue a statement to reassure investments, noting “trading activity is not the result of insider transactions or transactions by Advance/Newhouse Programming Partnership or its affiliates,” which are investors in the company, according to Deadline. The company also reiterated financial guidance and that it’s “pleased with the execution of its strategy, both with respect to its traditional business and the direct to consumer roll out.”