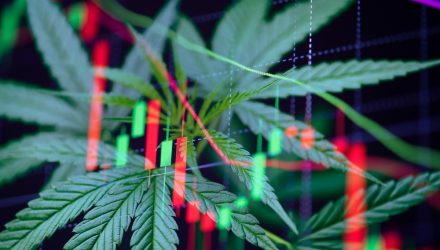 Cannabis sector-related exchange traded funds maintained their momentum on Wednesday as the Reddit crowd of day traders turned their attention to marijuana stocks.

Meanwhile, shares of Tilray (NasdaqGS: TLRY) jumped another 38.5% and were on track for their best three-day gain ever. The company stock has surged over 500% since the start of the year.

The group of marijuana stocks are catching the eye of the same group of WallStreetBets Reddit traders that contributed to the short squeeze in GameStop (NYSE: GME) last month after several users expressed optimism over the stock’s outlook, CNBC reports.

“The rally in Canadian names is mostly driven by retail investors, maybe fueled by Robinhood and Reddit, that’s really piling into the Canadian cannabis names in particular,” Pablo Zuanic, analyst at Cantor Fitzgerald, told CNBC. “I’m not going to say it’s a GameStop type of case but the Canadian rally is not entirely based on fundamentals. But when we talk to clients we tell them careful trying to short these Canadian names because you know what happened with GameStop on the way up.”

Some warned that the the aggressive moves in pot stocks could be related to high short interest ratios, which reflect how many of the company’s traded shares are being used in bets that the company shares will decline.

“The feedback is its some of the message boards are putting the big salient names in their scope,” W. Andrew Carter, an analyst at Stifel, told CNBC.

“The shorts have mostly gone home for the year so the unwinding isn’t as much of a tailwind as it was for the early price action it just really is just that much buying and not much resistance,” Carter added. “It’s very difficult to justify where these stocks are trading right now.”