You are at:Home»Equity ETF Channel»Coal ETF Is Having a Bad Year, with a Gloomier Outlook 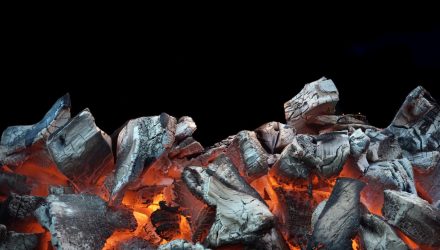 Coal ETF Is Having a Bad Year, with a Gloomier Outlook

Coal prices are on pace for their biggest annual decline in over a decade, weighing on a coal sector-themed ETF, on declining demand for coal-fueled power and steel.

At its current pace, the drop in coal prices would be the largest one-year decline since S&P Global Platts started keeping records going back to 2007, the Wall Street Journal reports.

Furthermore, falling steel production across Europe, India, and Japan has weighed on the price of coking coal, which is used to manufacture the alloy metal. Spot prices coking coal have also plummeted by 38% this year to $136 per metric ton.

A Real Blow To Coal Producers

The falloff in demand has dealt a blow to U.S. coal producers, which have experienced a series of bankruptcies, including Blackhawk Mining LLC and Westmoreland Coal Co.

“It’s oversupply that’s the culprit in both markets,” David Price, senior director at IHS Markit, told the WSJ. “It’s not a good-looking market for next year for thermal. Met[allurgical]coal is slightly better, and it will still be China which swings international prices.”

The market is suffering from unbalanced fundamentals. The International Energy Agency revealed that the world has consumed less coal in 2019 than in 2018 largely as coal-fired electricity generation is set to slip by over 250 terawatt-hours or over 2.5%, the biggest drop on record. The industry has also suffered from a large decline in the amount of thermal coal used by U.S. and European power stations where cheaper natural gas alternatives and rising regulations on fossil fuels have caused a shift in coal demand.

However, China remains a bastion for the coal market, making up around half of the total demand, and the emerging economy continues to ramp up consumption.

“The Chinese government wants to reduce its reliance on imported coal,” Manjot Singh, an analyst at commodities consulting firm CRU Group, told the WSJ. “Their intention is to protect the domestic coal industry because it’s the source of employment for so many people.”

For more information on the materials sector, visit our basic materials category.