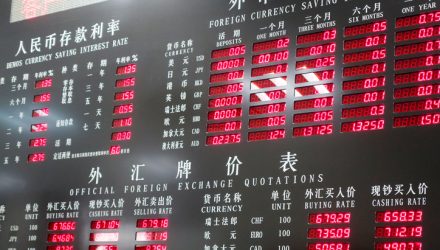 China’s economy has been expanding at breakneck speeds, but the emerging Asian equity market has fallen behind. The slow growth may be attributed to a large amount of unwieldy state-owned industries, but investors can look to ETFs to target potential opportunities.

China has expanded three times as fast as the U.S. this decade. However, the MSCI China Index has gained 18% over the past five years, compared to the 50% increase for the S&P 500, Barron’s reports.

While the disparity may be partially attributed to recent trade tensions, structural factors may be at play. China’s ruling party tries to maintain socialist stability through capitalism, and the result is that shareholders’ interest is not a primary concern, especially among state-owned companies. For example, Beijing requires these companies to raise salaries in line with the national gross-domestic-product growth regardless of how their own top line is doing.

“U.S. companies are run for shareholder returns; Chinese companies are a lot like employment agencies,” Louis Lau, director of investments at Brandes Investment Partners, told Barron’s. “If they are generating cash, it’s used for pet projects of the government, not dividends.”

Despite the state’s heavy hand, there is an opportunity in China’s market. You just need to know where to look. For example, one of the better alternatives is the WisdomTree China ex-State-Owned Enterprises Fund (NasdaqGM: CXSE).

CXSE tracks the WisdomTree China ex-State-Owned Enterprises Index (CHXSOE), which tracks Chinese companies that are not state-controlled. State-owned enterprises are defined as government ownership of more than 20% of outstanding shares of companies, according to WisdomTree. By eliminating exposure to China’s state-run companies, the CXSE features scant exposure to banks and energy stocks.

Additionally, investors can look to something like the tech-heavy VanEck Vectors ChinaAMC SME-ChiNext ETF (NYSEArca: CNXT), which tracks the SME-ChiNext 100 Index. The underlying benchmark tracks the performance of the 100 largest and most liquid China A-share stocks listed and trading on the Small and Medium Enterprise (“SME”) Board and the ChiNext Board of the Shenzhen Stock Exchange.