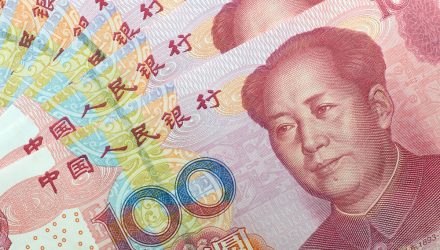 On Monday, the Xtrackers Harvest CSI 300 China A-Shares ETF (NYSEArca: ASHR), the largest China A-shares related ETF, advanced 1.5% and the VanEck Vectors ChinaAMC SME-ChiNext ETF (NYSEArca: CNXT), which tracks the performance of the 100 largest and most liquid China A-share stocks listed and trading on the Small and Medium Enterprise Board and the ChiNext Board of the Shenzhen Stock Exchange, increased 3.9%.

Jefferies analyst Edison Lee argued that non-U.S. investors, whom wouldn’t be covered by the ban, are “bottom-fishing”, the Wall Street Journal reports. Lee believed the business fundamentals of the three de-listed firms had been on the rise.

President Donald Trump previously signed an executive order that would block on Jan. 11 Americans from investing in companies the U.S. government deemed help the Chinese military.

“This is not a problem for the Chinese telecom companies. It is a problem for the U.S. investors that have to sell, locking in their investments at a historically low price,” Peter Milliken, head of Asia-Pacific telecom research at Deutsche Bank, told CNBC.

Milliken argued that the de-listings will not impact the carriers’ businesses since “they are cash-flow machines, not needing to be fueled by new capital from the U.S., or anywhere.”