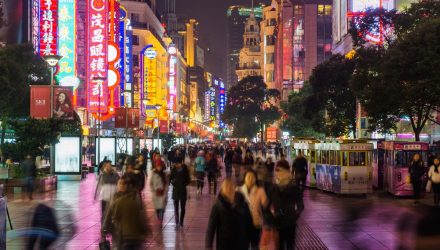 The Chinese economy expanded by 6.4% year-over-year in the first quarter of 2019, compared to analysts’ expectations of a 6.3% growth, CNBC reports.

Along with the broader positive economic growth trends, industrial production increased to a much better-than-expected 8.5% year-over-year in the month of March, its fastest pace since July 2014, and beating out the 5.9% expected rate.

Retail sales over March advanced by 8.7% year-over-year, compared to projections of a 8.4% rate.

Additionally, fixed asset investment over the first quarter rose 6.3% year-over-year, which was in line with expectations.

Traders have been closely watching for the economic data points to gauge the health of the Chinese economy as the U.S.-China trade dispute extends with negotiations still ongoing.

Some observers attributed the better-than-expected Chinese economic figures to the recent measures taken by Beijing to support the economy, including accommodative measures to stimulate growth amid mounting trade concerns that depressed its markets.

“Negotiations are continuing. We saw positive signs but we still have to be fully aware of the uncertainties and the volatility that that could bring later on,” Hu said.

However, others warn that with the good showing in the economic numbers, Beijing may ease off further stimulus measures.

“We should bear in mind that the growth target this year is 6-6.5%, and the latest 1Q number is already reaching the top end of this range,” J.P. Morgan Asset Management’s Tai Hui, the firm’s chief market strategist for Asia Pacific, said in a note.