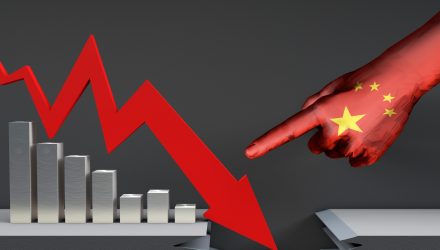 China ETFs Back Off Economic Growth Concerns in Wake of Coronavirus

China country-specific ETFs were the hardest-hit areas of the market Monday as investors assessed the extent of the coronavirus outbreak and worried about the potential negative effect it will have on the economy.

The outbreak of the deadly coronavirus will likely weigh on consumption and travel during the traditionally busy lunar new year holiday break. The virus has forced Beijing to cancel holiday events across the country and to extend the new year break as the number of reported deaths and infections rise, the Financial Times reports.

The outbreak caused the government to extend the holiday period by up to a week in places like Suzhou, postponing the return of millions of migrant laborers and potentially weighing on the manufacturing sector. Suzhou is one of the world’s largest manufacturing centers where multinational companies like Johnson & Johnson have set up factories.

“The timing could not have been worse as hundreds of millions of Chinese are returning home for family reunions or are on leisure travel ahead and during the Chinese New Year,” Priyanka Kishore of Oxford Economics told the Financial Times.

The government, though, has issued some support to provide a helping hand for those affected by the shutdown.

The virus hits in a precarious time for China as the economy suffers through its lowest rate of growth in almost three decades.

Among the areas to take the brunt of the coronavirus hit, the sectors that cater to retail, consumer demand, and tourism will likely be the first to feel the pain.

“Everything depends on how rapidly it spreads and how serious it gets, but in principle, this could have a serious impact on consumption,” Michael Pettis, a finance professor at Peking University and senior fellow at Carnegie-Tsinghua Center, told FT. “People are not going out to restaurants and bars.”