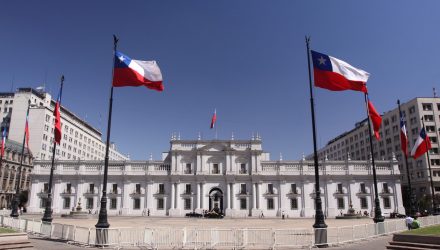 Chile-related ETF took another dive on Tuesday after the Chilean government downgraded its growth projections in response to recent violent protests that broke out across the country.

Dragging on the Chilean markets, newly appointed finance minister Ignacio Briones stated that the economy will likely expand between 2.0% and 2.2% in 2019, compared to a prior forecast for 2.6% growth after more than two weeks of protests in the Andean nation, Reuters reports.

“We see growth at the end of the year down from our previous estimate of 2.6% to a range of 2.0% to 2.2%,” Briones said at the Moneda presidential palace.

Briones previously warned that economic indicators ahead would further reveal the full impact of the protests.

The finance minister said October’s IMACEC economic activity index was likely down to between 0% and -0.5%, compared to September’s 3% growth announced on Monday, due to the protests the country has experienced over the past two weeks.

“Owing to the situation the nation is facing, the finance minister came clean on forecasts with congress and reduced the growth estimate,” the ministry said on Twitter.

The recent unrest was triggered by a hike in metro fare prices, but the fare increases may have been the straw that broke the camel’s back after the long-simmering anger at the government’s failure to alter Chile’s economic course, the pro-business policies and growing inequality.

The sudden outbreak of riots, arson and protests over inequality have caused at least 18 deaths and 7,000 arrests. Meanwhile, Chilean businesses lost more than $1.4 billion, and the city’s metro system suffered nearly $400 million in damages.

The violence has also forced the government to cancel the Asia-Pacific Economic Cooperation summit and U.N. climate change meeting that were previously scheduled to meet in Chile.