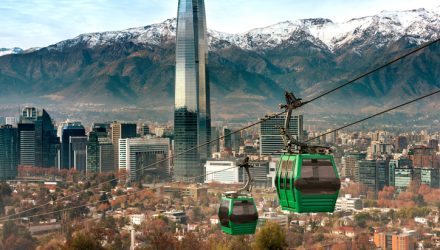 The Chile-specific ETF retreated Wednesday after the government cancelled a pair of major global summits on the economy and environment for the weeks ahead in what appeared to be a sign of the country’s weakening control over growing unrest in Santiago.

Chilean equities plummeted Wednesday after President Sebastián Piñera announced the cancellation of the major summits to be held in the country as his administration struggled to suppress growing demonstrations in the capital over issues of inequality in South America’s wealthiest nation.

As many as 1 million protesters took part in peaceful demonstrations over the weekend, but some smaller protests turned violent, prompting the government to declare a state of emergency, the Washington Post reports.

President Donald Trump was previously scheduled to attend the Asia Pacific Economic Cooperation forum in Santiago from November 15 to 17 where he was expected to meet with Chinese President Xi Jinping to hammer down details of a “phase one” trade pact that would ease tensions between the two largest economies in the world and outline a path toward a bigger trade deal next year.

Chilean officials also canceled its intent to host the Conference of the Parties, or COP, a major climate change summit, where over 100 international delegations were expected.

“A president must always put his compatriots above all else,” Piñera said. “Our main concern is reestablishing public order, our citizens’ safety and social peace along with pushing through a social agenda to respond to the main demands of our citizens.”

Chile has been grappling with increased unrest since last week when violent protests have caused the military to intervene and a state of emergency was enacted in the capital city of Santiago.

The ongoing unrest and the government’s cancellation of key summits ahead dispelled any confidence that the country would handle the flare ups any time soon.