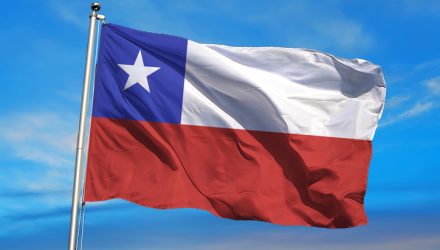 The Chile-related ETF suffered through another round of political risk after President Sebastián Piñera’s unexpected proposal to redo the country’s constitution fueled fears that the move would negatively affect the economy.

The iShares MSCI Chile ETF (NYSEArca: ECH) was among the worst non-leveraged ETF performers on Tuesday, declining 4.4% on over five times its average trading volume.

Investors are concerned that Chile’s economic model could be undermined if the government rewrites the constitution, the Financial Times reports. Meanwhile, members of the opposition party and the government’s own coalition warned that the proposed constitution would fail to calm protesters.

“A new constitution changes all of the rules and makes people very nervous,” Felipe Alarcon, an economist at financial services firm Euroamerica, told Bloomberg. “There is speculation that some sectors may try to strengthen some social rights at the cost of private property rights.“

The proposed constitution is the latest way to appease growing unrest over inequality and rising cost of living in the Latin American country. Demonstrators have disregarded the current constitution as an illegitimate holdover from the previous 1973-90 military dictatorship under General Augusto Pinochet.

Many also blame congress, which seen its image damaged in recent years after a number of corruption scandals across the political spectrum.

Piñera told the Financial Times that changes to the constitution had to be made “within the boundaries of our democracy and our institutions”. If not, “we would be undermining the very foundations of democracy and the rule of law”.

“It’s a big concession from the government and the right as they never wanted to consider this in the past,” Robert Funk, a political science teacher at Universidad de Chile, told Bloomberg. “It may cause a rift between the more violent groups, that want nothing less than Pinera to resign, and the middle class that has demands of its own.”

In a further bid to quell unrest, the government has also introduced a social package that could cost at least $1.5bn to increase pensions and minimum wages, and subsidize medicines and electricity prices.