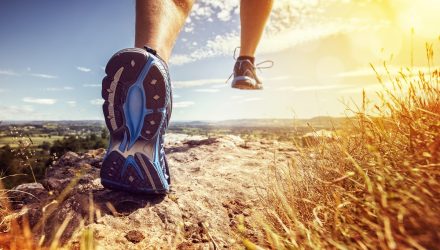 Unlike the Nike shoe, which featured a U.S. flag with 13 white stars in a circle on the heel, a design created during the American Revolution and commonly referred to as the Betsy Ross flag, which Nike advisor and campaign model Colin Kaepernick believes is offensive due to its connection to slavery, the Brooks shoe is enhanced with a more innocuous and generic image, with navy star print emblazoned on the right shoe and red and white stripes decorating the left shoe.

After Nike decided to pull the Air Max 1 USA, the sports apparel giant commented on the media frenzy.

“We regularly make business decisions to withdraw initiatives, products and services. Nike made the decision to halt distribution of the Air Max 1 Quick Strike Fourth of July based on concerns that it could unintentionally offend and detract from the nation’s patriotic holiday,” Nike said in a statement.

In May the chief executive of Brooks Running, part of Warren Buffett’s Berkshire Hathaway Inc, said his company will shed much of its presence in China by moving running shoe production to Vietnam, a result of the trade dispute between China and the United States.

“We’re going to pull most of our production out of China,” he said. “We’ve had to make a long-term decision on this picture. It’s disruptive, but the reality. So we’ll be predominantly in Vietnam by the end of the year.”

Brooks shoes are sold in 56 countries, and account for the bulk of the Seattle-based company’s annual revenue, which grew 26 percent last year to $644 million.

Appropriately, Brooks also has a signature Berkshire Hathaway running shoe, which the company describes on their website: “The limited-edition Berkshire Hathaway Ghost 11 puts the world’s best investors right at your feet—financial advice not included.”

Investors who are supportive of Nike can look at ETFs with heavy weightings of the stock such as the  iShares U.S. Consumer Goods ETF (IYK) or the Invesco DWA Consumer Cyclicals Momentum ETF (PEZ), while those looking for ETFs with Brooks Running can explore the VanEck Vectors Vietnam ETF (VNM).