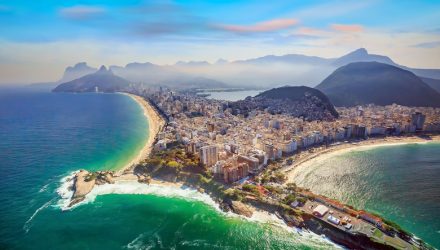 The Brazil country-specific ETF rallied Tuesday, with the Brazilian markets touching an all-time high, after the Senate Constitutional and Legal Affairs Committee approved the text of a long-waited pension reform bill, setting the stage for a second and final vote later in the day.

Meanwhile, Brazil’s benchmark Bovespa stock index gained around 1% to break above 107,000 points for the first time ever.

The pension reform bill is seen as a key policy change that many expected to help revive faltering economic growth, Reuters reports. The bill will help save the Treasury around 800 billion reais, or $195 billion, over the next decade through a range of measures like hiking the minimum retirement age and raising workers’ pension contributions.

The government and economists argue that the reform bill is the single most crucial measure to straighten out Brazil’s public finances, boost investor and business confidence, and revitalize a slowing economy.

While investors have had plenty of time to price in the impact of the bill after months of deliberation through both houses of Congress, Brazilian markets still surged on Tuesday.

“This has been a long time coming, so it is largely priced in. But there’s some optimism and relief today for sure. It’s inevitable, really,” Jason Vieira, chief economist at Infinity Asset Management in Sao Paulo, told Reuters.

The country has suffered with many arguing that public finances are extremely stretched, partly due to high social security costs, along with declining tax revenues in response to the weak economic growth. The economy is on pace to expand by less than 1.0% this year, which falls short of the previous two years and well below the 2% or more most economists projected.