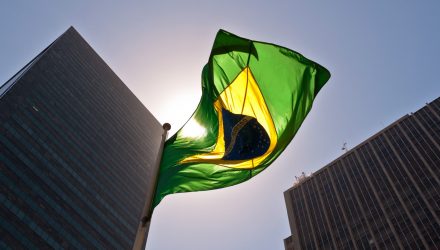 Brazil ETF Could Be on Steady Footing with the Worst Over

While economists have cut back on their 2019 Brazilian economic growth expectations, many see no changes in the outlook for other major macreconomic indicators, which suggests that the worst may be over for Brazil’s markets and country-specific exchange traded funds.

The iShares MSCI Brazil Capped ETF (NYSEArca: EWZ), the largest Brazil-related ETF, has increased 19.9% year-to-date and advanced 44.1% over the past year.

According to a central bank survey, economists trimmed Brazil’s growth forecast to an average new low of 0.82% from 0.85% a week before, but the estimates for inflation, the exchange rate and official interest rates for this year out to 2022 were left unchanged, Reuters reports.

After contracting a slight 0.2% in the first quarter of the year, the economy likely stagnated, possibly even dipping into recession over the second quarter, according to recent economic indicators.

The latest FOCUS survey, which provide a comprehensive real-time guide to market sentiment on the Brazilian economy, signaled stabilization in the economy for now.

Further bolstering the outlook, a special pension reform committee in Congress passed the basic text of a bill to generate savings of around 1 trillion reais or $264 billion over the next decade, which could help shore up public finances and spur investment and economic growth. Voting in the plenary could start as early as Tuesday.

The average forecasts were taken from about 100 financial institutions in the central bank’s weekly “FOCUS” surveys.