You are at:Home»Equity ETF Channel»Biotech ETFs Poised for Gains after Moderna Vaccine News 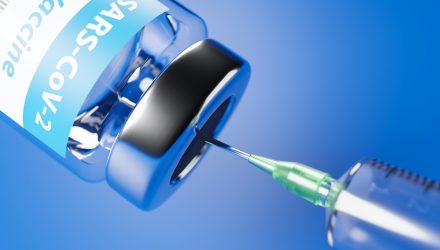 Biotech ETFs are getting a boost along with stocks on Monday thanks to Moderna, which announced that its initial phase three trial data reveals a coronavirus vaccine that is over 94% effective.

Shares of the Moderna surged over 12% in premarket trading, and are still up over 7.5%. Meanwhile, the iShares Nasdaq Biotechnology ETF (IBB) is gaining slightly on the news.

Moderna evaluated 95 confirmed coronavirus infections among the trial’s 30,000 participants, and said said 90 cases of the virus were seen in the placebo group versus the five cases discovered in the two-dose vaccine group. The estimated vaccine effectiveness was 94.5%. Moderna created its vaccine in collaboration with the National Institute of Allergy and Infectious Diseases, although it will not be widely available for months, and likely not until spring.

The biotech also noted that the vaccine was efficacious over a diverse group of participants. Of the 95 coronavirus cases, 20 participants identified as being from “diverse” communities, including 12 Hispanic people, four African Americans, three Asian Americans, and one multiracial. Fifteen were adults over the age of 65.

Last Monday saw stocks and index ETFs surge after the announcement from Pfizer that the pharmaceutical giant had a Covid-19 vaccine candidate with an over 90% effectiveness in clinical trials. The coronavirus infection has spread to more than 54.4 million people and killed more than 1.3 million, according to data compiled by Johns Hopkins University.

Health and Human Services Secretary Alex Azar told CNBC on Monday that U.S. Food and Drug Administration will move “as quickly as possible” to clear Pfizer and Moderna’s coronavirus vaccines for emergency use.

Moderna’s CEO Stephane Bancel called the vaccine a “game changer,” referring to the study as a “pivotal moment.”

“Since early January, we have chased this virus with the intent to protect as many people around the world as possible. All along, we have known that each day matters,” he said in a statement. “This positive interim analysis from our Phase 3 study has given us the first clinical validation that our vaccine can prevent COVID-19 disease, including severe disease.”

The biotech also noted that there were no “significant” safety concerns with the vaccine, and claimed that it was generally well-tolerated with mainly mild to moderate adverse events. Side effects were typical symptoms such as discomfort at the injection site and, after the second dose, fatigue, muscle pain, and headaches.

“Knowing that we have a vaccine that would help more people who would take it is just a wonderful feeling,” Bancel said in an interview with CNBC. “As you know a lot of people have been reluctant in surveys to take a vaccine because I think we’re worried about the politicization of a vaccine, they’re worried about what you get with a flu shot you know 50% to 60% efficacy.”

Bancel said the company plans to test the vaccine in teens “very soon,” followed by children under the age of 12. “We have to be very, very careful because safety is priority No. 1,” he said in a separate interview on CNBC’s “Squawk Box,” adding most trials test vaccines on healthy adults first to assess safety.

One potential hiccup is that medical pundits are unclear as to how long the vaccine provides immunity and whether or how often people may need periodic booster shots, due to the short quantity of data.

“These vaccines are going to be approved and then rolled out with basically a few months worth of data. You’re not going to do a two-year study to see whether it’s effective for two years with more than 200,000 people dying this year” in the U.S., said Paul Offit, director of the Vaccine Education Center at Children’s Hospital of Philadelphia.