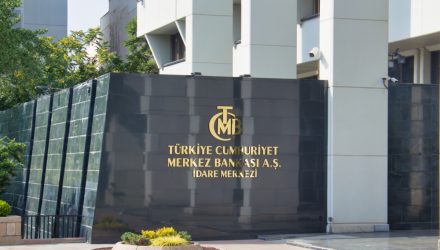 After suffering through a precipitous plunge, Turkey country-specific exchange traded funds are starting to recover as bargain hunters look to a market that experienced its worst two-day drop in two decades.

The iShares MSCI Turkey ETF (NasdaqGM: TUR) rose 3.4% on Wednesday and was testing its long-term support at the 200-day simple moving average. TUR plunged around 20% over the past two trading sessions.

Yigit Bulut, a senior advisor to Erdogan, stated that the central bank will try to avoid any extreme actions under Agbal’s successor, Sahap Kavcioglu. He also reaffirmed Erdogan’s belief that high inflation is a result of elevated interest rates, so the markets could expect lower interest rates out of the Turkish central bank ahead.

“We’re starting to remove some of the hedges as we see opportunities in some stocks,” Semih Kara, chief investment officer of Tacirler Asset Management, told Bloomberg.

Turkey’s benchmark BIST 100 Index gains were led by shares of exporters and companies with foreign currency income, which should benefit from the weakening Turkish lira currency or strengthening foreign currencies.

“Investors had a bitter pill to swallow with yet another pivot at the central bank,” Akber Khan, senior director of asset management at Al Rayan Investment, told Bloomberg. “With his proactive measures, Agbal had rapidly built precious credibility with investors, so his abrupt departure, and little clarity on the way forward, left investors fearing the worst.”

Dragging on Turkish markets this week, the lira currency plummeted as much as 15% on Monday, and some analysts predict further depreciation against the U.S. dollar, with options traders exhibiting their most bearish stance on the currency on record.

“In contrast to previous periods, like in 2018 or November 2020, interest-rate hikes might not stop lira depreciation” because any tightening has proved short-lived, Ulrich Leuchtmann, head of currency strategy at Commerzbank AG, told Bloomberg. “What will end the next lira depreciation episode? I am asking myself, without having an answer.”