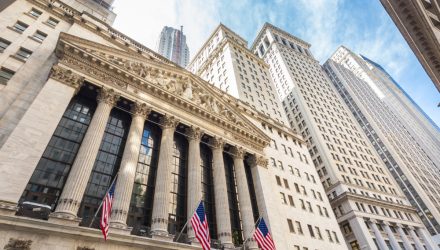 Bank stocks and sector-related exchange traded funds have been hard hit and have fallen behind the broader market, but this segment may be a cheap opportunity.

Christopher Marinac, director of research at Janney Montgomery Scott, argued that investors who are confident that the U.S. economy will recover quickly as states reopen local economies should consider bank shares that are trading at discounts to tangible book value, MarketWatch reports.

Marinac and his team followed over 350 publicly traded U.S. banks, specializing in community and regional players, and found that 57% of the banks tracked were trading below tangible book value – the book value of its common shares, less intangible assets, such as loan servicing rights, goodwill, and deferred tax assets.

Among the 11 S&P 500 sectors, the financial services sector has been this year’s second-worst performer, or just ahead of the hardest hit energy.

While some may remember the 2008 financial crisis and how it affected banks, Marinac argued that investors’ “fear and irrationality overlooks how banks operate today with 25% less leverage in 2020 than 2009.” Furthermore, banks had the advantage of much lower loan-to-value ratios for commercial real estate loans, compared to the previous crisis.

“Investors know this is today’s lending reality, yet they’ve lost their common sense. I have seen it before — this is the fourth financial crisis in my career,” Marinac added.

Julian Emanuel, the chief equity and derivatives strategist at BTIG, was also puzzled by the underperformance of financials since the markets bottomed out in late March. He believed that financials, especially banks, should benefit from the Federal Reserve’s efforts to bolster the economy, Business Insider reports.

These banks are part of a key component in distributing aid to small businesses and enabling the issuance of debt that will help solve the current solvency crisis.

Federal Reserve Chairman Jerome Powell has also affirmed that they will not devolve to negative interest rates to fight the crisis.

Emanuel also pointed out that many market recoveries occurred when stocks were at “extreme oversold” conditions, and many such stocks that bounce back were among the most disliked.