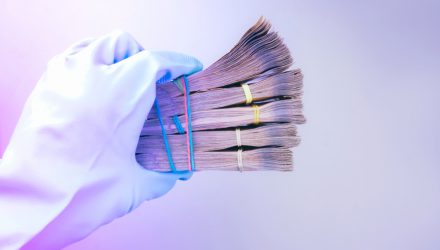 Financial sector-related exchange traded funds plunged after a fire sale of stocks from a U.S. hedge fund dragged on Credit Suisse Group AG and Nomura Holdings Inc., fueling speculation of a wider fallout in the banking segment and potential for additional regulations.

Losses at Archegos Capital Management, run by former Tiger Asia manager Bill Hwang, have triggered margin calls that required the liquidation of other positions close to $30 billion in value.

Credit Suisse warned it was too early to fully quantify the impact of the fallout but it could be “highly significant and material” to results for the first quarter, which ends in a couple of days. Prior to Monday’s warning, Credit Suisse had stated that its pre-tax profit in January and February was the best in a decade and that revenue in its investment bank was up over 50% for the same period last year.

In a margin call, a bank requires a client to put up collateral if a position partly funded with borrowed money has quickly devalued. If the client can’t afford to make up the value, the lender will sell the securities to recoup what it is owed. In this case, the position was so large that the institution was forced to sell off securities in a fire sale to make up the losses.

“There is widespread selling because there is uncertainty about who’s involved,” Seema Shah, chief strategist at Principal Global Investors, told the WSJ. “It is fear specific to this, specific volatility around that circumstance.”