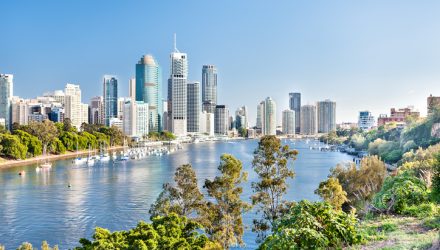 Australia country-specific ETFs could get a helping hand from the Reserve Bank of Australia as the central bank cuts interest rates for the second time in as many months to support the resource-rich economy in an increasingly uncertain global outlook.

The Australian central bank lowered its official cash rate to a record low 1.00% on Tuesday, down from 1.25% after the cut in June, as policy makers underscored the U.S.-China trade dispute that threatened the global export industry, the Wall Street Journal reports.

The RBA’s dovish stance comes as other global central banks consider more accommodative monetary policies as well to combat the negative effects of slowing global growth and the prospects of a prolonged trade dispute between some of the largest economies in the world.

“The uncertainty generated by the trade and technology disputes is affecting investment and means that the risks to the global economy are tilted to the downside,” RBA Gov. Philip Lowe said.

Lowe argued that the pace of economic growth needs to accelerate to tighten the job market and the rate cuts could bolster wage growth and restore inflation back to the target band of 2% to 3%.

“There has been little inroad into the spare capacity in the labor market recently, with the unemployment rate having risen slightly,” Lowe said. “These labor market outcomes suggest that the Australian economy can sustain lower rates of unemployment and underemployment.”

The Australian economy has fallen off since mid-2018 due to weak wage growth and record household debt that contributed to diminished household spending. Furthermore, falling home prices have dampened spending as well, contributing to the lowered growth outlook.

Economists expect the central bank to continue with rate cuts before the end of the year as projections for GDP growth, inflation and unemployment fall short of targets.