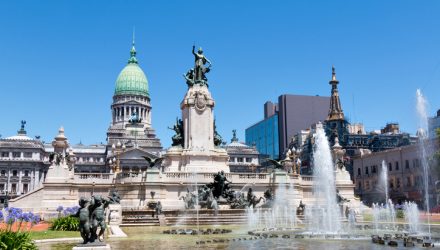 Argentina ETFs strengthened Friday after updated data revealed the emerging economy’s activity rose for the first time in over a year in May.

Argentina has suffered through a devastating recession, but the latest figures may reveal an economy that is turning around. The country’s economy expanded 2.6% in May year-over-year, beating the most optimistic estimates from analysts and broke a run of 12 consecutive months of falling economic activity, Reuters reports.

The updated economic figures was a welcomed sight for President Mauricio Macri, whom has been criticized for the weakening economy. The center-right leader also faces a tight election race against a resurgent opposition in the upcoming October 27 vote.

Argentina’s Treasury attributed the sudden turnaround to the strong growth out of the farming sector, which was up nearly 50% year-over-year, along with improvements in sectors including transport, industry, commerce and construction.

“Looking forward, it is expected the agricultural campaign, which unlike 2018 enjoyed good weather conditions, will continue to contribute to growth,” the ministry said, adding better salaries and lower inflation should also help. “All this allows us to imagine growth continuing in the months ahead.”

The Argentinian markets have also been strengthening with a more stable peso and lower inflation.

Looking ahead, the markets are wary of the potential downfall of business-friendly center-right Macri as many observers fear a return to the policies of the previous administration when then President Cristina Fernandez de Kirchner enacted currency controls, intervened in the economy and butted heads with investors at the expense of growth and business confidence, Bloomberg reports.

“Investors might just take profits prior to the primaries,” Edwin Gutierrez, the head of emerging-market sovereign debt at Aberdeen Asset Management, told Bloomberg. “They have made good money on the trade, and liquidity is going to get worse as we get closer to the real elections.”