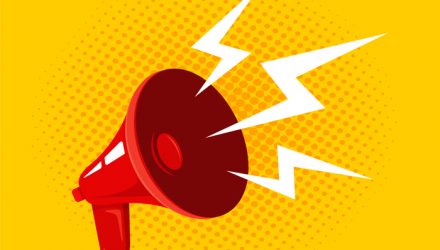 Alphabet shares advanced 10.2% in late-day trading and was on pace for their biggest daily gain in four years. GOOGL makes up 11.5% of XLC’s underlying portfolio, 10.5% of VOX and 10.0% of FCOM.

The company’s cloud business, while smaller than other market leaders, still generated about $2 billion in quarterly revenue, Reuters reports. Google Chief Executive Officer Sundar Pichai has exhibited big ambitions to eventually add more revenue from the company’s cloud unit than its mainstay ad business, arguing that the cloud business is now at an annual revenue run rate of $8 billion and would triple sales staff over the next few years.

“Much smaller than AWS, but like Azure, growing faster,” Baird analysts wrote in a note, referring to Amazon’s AWS and Microsoft’s Azure cloud businesses.

Nevertheless, Alphabet is still reliant on its ad business, which helped the company beat second-quarter revenue and earnings expectations, after bouncing back from a rare revenue miss over the first quarter. The firm also provided no negative guidance over the increased regulatory scrutiny.

Some observers, though, have lingering questions about whether privacy, content moderation and proposed antitrust rules in the United States and other high-revenue countries will weigh on the online advertising business.

“We expect the negative news flow to continue this year and Big Tech is clearly coming under increased scrutiny,” Monness Crespi Hardt analyst Brian White wrote in a note.